VIAC and How it Works

Visual Inspection with Acetic Acid and Camera, or VIAC, is an effective way to prevent cervical cancer in women age 30-50 years old. It involves examining the opening of the womb, or the cervix, for changes that might lead to cancer. If these changes are detected early, the cells can be eliminated before they become cancerous. The cells are usually removed using a method called cryotherapy, or another method called LEEP. Both treatments are briefly described below.

Visual inspection with acetic acid and treatment using cryotherapy or LEEP has been well-studied and is endorsed by the World Health Organization. WHO recommends using this “screen-and-treat” approach as an effective, low-cost way to reduce the incidence of cervical cancer in low-income countries. The disease is caused by the human papillomavirus (HPV), and it is the leading cancer killer of women in Zimbabwe and other sub-Saharan African countries.

The Zimbabwe Ministry of Health and Child Care has an established cervical cancer prevention program that offers VIAC screening and treatment at several of the nation’s major hospitals. 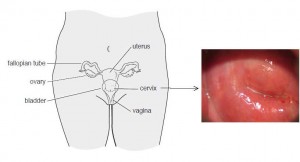 Figure 1. Left, the location of the cervix in the body. Right, a photo of a healthy cervix taken during a VIAC examination at St. Albert’s Mission Hospital.

Cervical cancer arises in the transformation zone of the cervix

The place where the columnar cells meet the squamous epithelium is called the transformation zone. Cell division occurs at this junction, and it is in this junction that cervical cancer

Figure 2. This photo of a cervix taken during a VIAC examination at St. Albert’s shows the white patches formed by precancerous cells.

occurs. Abnormal cells can arise here spontaneously or they can be induced by exposure to carcinogens such as certain strains of hPV or the chemicals produced during tobacco use. If these abnormal cells are not cleared by the immune system, they can progress to cervical cancer.

When precancerous cells arise, they have particular characteristics. They have larger nuclei and less cytoplasm, which is evidence of increased cell division (i.e., mitosis). When the cervix is swabbed with dilute acetic acid, the acid denatures the proteins in the precancerous cells, causing them to clump. It also dehydrates the cells. Light cannot penetrate these dense cells and instead is reflected back, making the cells appear white. 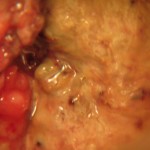 Figure 3. Photo taken during a VIAC examination at St. Albert’s showing a cervix with suspected cervical cancer. A definite diagnosis of cervical cancer requires further study of the tissue.

A nurse trained in VIAC can perform the screening exam, but if the exam reveals precancerous changes, possible cancer, or an inconclusive finding, the patient must be seen by a doctor for further care. If the precancerous cells are detected early enough, they are removed using either cryotherapy or LEEP, depending on their extent.

Cervical cancer develops over many years, passing through several stages. The earliest of these is the period in which abnormal cells are present but not yet cancerous. This precancerous stage is called cervical intraepithelial neoplasia (CIN). It is divided into three parts according to the degree of change present in the abnormal cells: CIN 1, CIN 2, and CIN3.

Women identified through VIAC screening as having CIN 2 and CIN 3 stage precancer should receive treatment, usually using cryotherapy or LEEP.

Cryotherapy, also called cryocautery, destroys precancerous cells by freezing them with ice-cold gas. It is used when the acetic-acid-induced white areas cover less than 75% of the ectocervix and do not extend into the endocervix. It is a simple outpatient procedure, and clients can go home the same day.

Note: After cryotherapy, a disharge from the vagina might continue for two to four weeks. It is generally a mild discharge and does not need treatment.  But if it persists, the woman should see a doctor and a vaginal swab taken for culturing.

LEEP removes abnormal areas from the cervix using a thin heated electrical wire that is  passed through transformation zone. It is done under local anesthetic on outpatient basis. The affected tissue is sent for histological review. The margin of the excision is coagulated during the procedure, resulting in minimal bleeding. LEEP is used when the white areas cover more than 75% of the transformation zone or extend into the endocervix.

Both treatments have a healing period of two to four weeks, with certain restrictions on a woman’s activity during that time. Complete healing generally takes about a month.

A few women might experience after-effects that must be treated at a health facility. Following either procedure, a woman should return to the treatment location after about six weeks to be checked and to receive her laboratory report.

After any of these treatments

93 thoughts on “VIAC and How it Works”