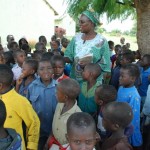 Do you, like us, occasionally receive free world maps in the mail as part of a donation drive by Doctors Without Borders and other NGOs? If you are looking for a use for these little gems, here’s a thought: Put them in an envelope and mail them to Better Healthcare for Africa at the address below. We will get them to  St. Albert’s Mission Hospital where they will be distributed to teachers in schools surrounding the hospital and in Muzarabani in the Zambezi valley, all of whom have few classroom materials and resources. 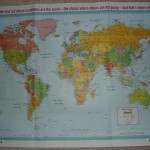 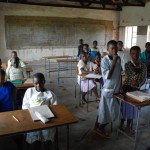 A classroom at Chikwira Primary School. Zimbabwe's economic crisis has hit schools so hard that some principals ration chalk to teachers.

A world map like the one shown here, mailed out as part of a fund-raising effort by Doctors Without Borders, can find use in classrooms like those at Chikwira Primary School.

Chikwira is one of many primary and secondary schools in the district served by St. Albert’s Mission Hospital. These are attended by orphans who come under the care of the St. Albert’s home-based care program. These orphans are adopted by foster parents who pay for a child’s school, books and uniform. In addition, the director of this program, Melania Nyamukuwa, follows up with the schools each year to be sure each child is attending school and doing well. With so few teaching aids, this small effort could pay big dividends.

Please send world maps that are in new or like-new condition to: