Tim Harris volunteered at St. Albert’s during Christmas break 2006 after learning about the hospital through a presentation I gave at Oregon State University. Tim served as a Peace Corps volunteer in the southern African nation of Lesotho during 2002-2004. He lived in the remote mountain village of HaMojakisane, where he educated villagers about HIV and AIDS, and promoted better nutrition. He helped villagers plant gardens, build greenhouses, raise chickens and rabbits, and collect water.

“I witnessed the costs of hunger, lack of education, and the absence of medical care,” he wrote in an email to Elizabeth at St. Albert’s. “The realities of my experiences are in part [what] have led me to the field of nursing and have given me the desire to be a future development worker. My eyes were opened during the two years that I lived in Africa among its people. I know that there is great work to be done….”

Prior to his departure for St. Albert’s, Tim collected donations of money, medical supplies and books from students, professors, local physicians, and hospitals to take with him (he ended up shipping 150 lbs of books for the hospital’s nurses training program).

His experience at St. Albert’s, he wrote, “Confirmed my decision to become a nurse. I felt a sense of purpose and achievement while caring for patients, and I tremendously enjoyed the relationships we shared. The Dalai Lama once said, ‘If you want others to be happy, practice compassion. If you want to be happy, practice compassion.’ My experience in Zimbabwe helped me understand the Dalai Lama’s sentiment more deeply. I was happy when working with patients, whether young, old, newborn or dying. At the end of my stay, the strongest feeling I had was one of urgency. I felt a need to complete my nursing education so I could return to places like Zimbabwe and help.” 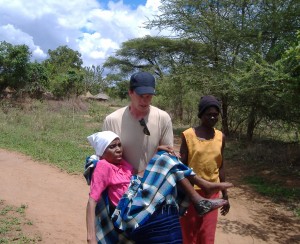 Tim Harris traveling with the St. Albert's Hospital home-based care team carrying a woman with bed sores to the truck for transport to the hospital.

In 2007, Tim entered the Johns Hopkins University School of Nursing, and then spent the 2008 summer break volunteering at two hospitals in Kenya: the Moi Referral Hospital, in Eldoret, and the Bondo District Hospital. Prior to leaving, he accepted donations and collected 300 lbs of medical supplies for the hospitals. In Kenya, he used his nursing training to help patients.

“I listened and observed as doctors and nurses generously shared their medical knowledge, wisdom and experience with me. I witnessed patients afflicted with meningitis, malaria, tuberculosis, herpes, abscesses, and broken bones. My heart ached when I saw infants suffering from HIV/AIDS, and I broke down crying when I was unable to resuscitate a child. The days were long and tiring, but at the end of each shift, I knew there was nothing else I would rather be doing.”

Tim graduated from Hopkins in May. In September he will become a commissioned officer in the U.S. Public Health Service with the Indian Health Services, working as an emergency room nurse at the Gallup Indian Medical Center, Gallup, NM.

“I choose to work with the Native Americans because of the opportunity to work with a culture different from my own, and because they are in need,” Tim wrote in an email. “The Navajo suffer from both medical and social economic disadvantages, but beyond their need for help, I am in some way helping myself. Further, I am very much looking forward to exploring the region, photographing, hiking, camping and bicycling in and around the Navajo Nation.”

Currently, Tim plans to work with the Navajo Nation Hospitals for three to four years, then volunteer with Doctors Without Boarders. “Beyond that my future is open, but I suspect I’ll be working overseas in poor countries or in a medically underserved community in the U.S.A.”

We wish Tim the best and hope he stays in touch as his future unfolds.