Much is going on at BHA behind the scenes, and it  has kept me away for too long. Following is a brief summary of a two-week trip to Zimbabwe  that ended March 28.
The trip’s accomplishments include the following:

• I visited Muvonde Mission Hospital and St. Albert’s Mission Hospital with Dr. Lowell Schnipper, chief of Hematology/Oncology and Clinical Director of the Beth Israel Deaconess Medical Center Cancer Center, and Theodore and Evelyn Berenson Professor of Medicine at Harvard Medical School. This was Dr. Schnipper’s first visit to the hospitals.

• Dr. Schnipper and I worked on details for a proposed cervical-cancer prevention project at St. Albert’s, and possibly at Muvonde Mission Hospital. We have collaborated via email and Skype with doctors at the two hospitals for more than a year, working together to design project. During this trip, Dr. Schnipper met the doctors and staff involved and toured the hospitals. The cancer prevention project uses a proven, low-cost, low-technology screening technique called visual inspection with acetic acid (VIA) to detect pre-cancerous changes on the cervix, and cryotherapy, a relatively low technology and low-cost method to remove pre-cancerous changes before they become cancerous, thereby preventing the disease. (We’ve since added a camera to image the cervix, as noted below.)

• We met with officials at the Zimbabwe Ministry of Health and Child Welfare (MOHCW) and others to discuss the project and ensure it met with national standards established by the Ministry. 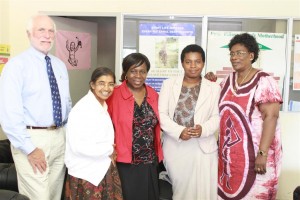 • Recognizing St. Albert’s critical need for access to medical information, and with reliable internet service at the hospital, Dr. Schnipper arranged for the hospital to obtain access to UpToDate, a web-based service of detailed and current medical information about the diagnosis, epidemiology, treatment and prevention of range of diseases. The hospital is receiving the service through an international grant subscription program.

• We delivered a modest amount of donated medical supplies to St. Albert’s.

We are seeking grant funding to support our cervical-cancer prevention project. If you know of a foundation or organization that might want to help, please email me at dward@betterhealthcareforafrica.org.

Here are some details about the trip. Dr. Julia met me at Harare International Airport March 15, and we I drove to St. Albert’s.

Two days later, Dr. Neela Naha, the obstetrician at St. Albert’s, and I returned to Harare to meet Dr. Schnipper at the airport.

Next morning, March 18, Dr. Neela, Dr. Schnipper and I traveled to Muvonde Mission Hospital, located about 130 miles south of Harare in Midland Province. We had a cordial meeting with surgeon Dr. Moses Muteyiwa, matron Sr. Marcelline Chireshe, and others to discuss the project and its feasibility at Muvonde should we obtain funding. We then toured the hospital. 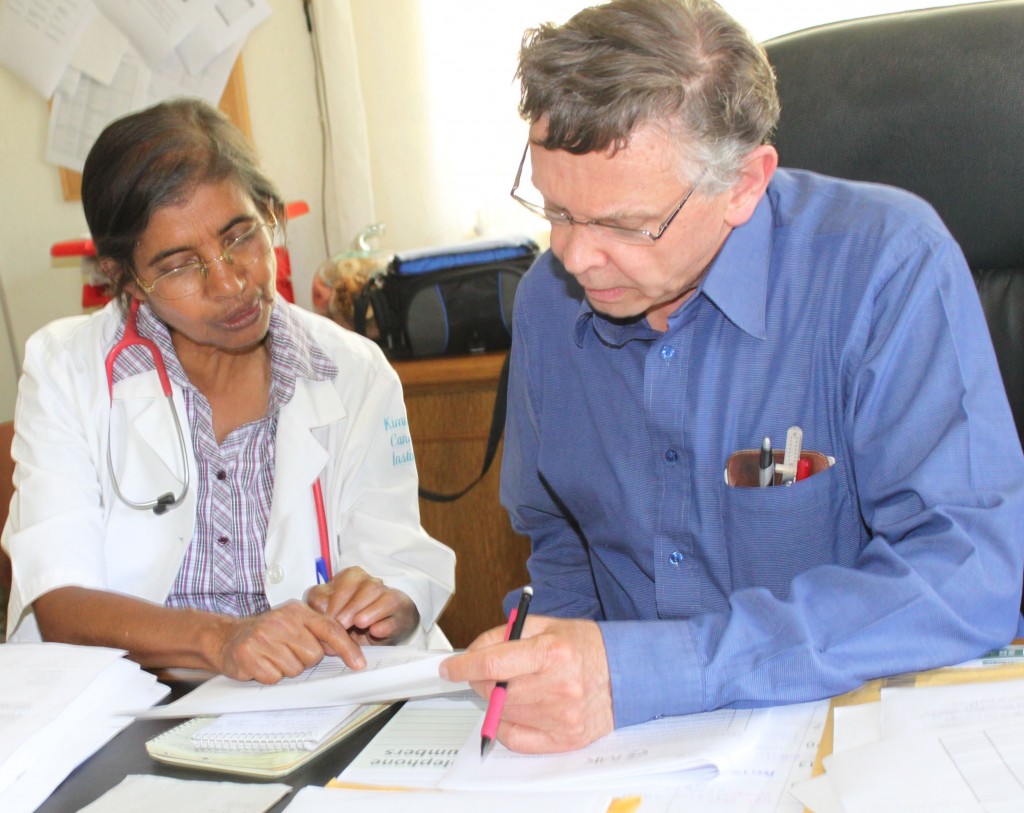 Darrell Ward at St. Albert's working with Dr. Neela on the community awareness initiative, an important component of the cervical cancer prevention project.

We returned to Harare next morning and met later that afternoon with Dr. Tsungai Chipato, an obstetrician and gynecologist in private practice. Dr. Chipato is also affiliated with the University of Zimbabwe and familiar with VIA. We discussed our project with Dr. Chipato, who is friendly, open and helpful with suggestions.

We met with Mrs. Margaret Nyandoro, deputy director of Reproductive Health the following next morning at the MOHCW. Also there were Dr. Anna Nyakabau, a radiation and medical oncologist with the Ministry and Parirenyatwa Hospital; Dr. Edwin Mpeta, a program specialist in reproductive health with the UN Population Fund (UNFPA) Zimbabwe Country Office; and Ms. Muchaneta Mandara, a reproductive health officer for the MOHCW who specialized in cervical cancer.

Mrs. Margaret Nyandoro was helpful and encouraging about the St. Albert’s VIA project. She explained that the MOHCW was implementing a similar cervical cancer prevention program at the government’s national and provincial hospitals.  The program was being carried out in partnership with the United Nations Population Fund (UNFPA), which was providing the equipment.

The MOHCW program was nearly identical to the VIA project we were proposing with a difference. Their program also used the “visual inspection with acetic acid” screening technique, but the government program included use of a camera to photograph the cervix to help diagnose the presence of pre-cancerous changes. Their technique is called VIAC (visual inspection with acetic acid and camera).

Because the MOHCW program was introducing the VIAC program only at national and provincial hospitals, Mrs. Nyandoro was pleased to hear of our effort to establish a program at St Albert’s and possibly at Muvonde, and she provided us with copies of the VIAC manual they provide hospitals and with copies of posters and patient information.

This MOHCW meeting enabled us bring our proposal in line with Zimbabwe national standard for a VIAC clinic and staff training. Following the meeting, the three of us drove to St Albert’s located 110 miles north of Harare in Mashonaland Central Province. There, Dr. Schnipper presented our program to a district oversight committee. Next morning, we toured the hospital, drove down the escarpment to visit Muzarabani clinic in the valley, and returned to Harare.

There, the three of us met again with medical and radiation oncologist Dr. Anna Nyakabau at Parirenyatwa Hospital. Dr., Edwin Mpeta was there also, and we talked further about our VIAC initiative.

The following day, March 22, Dr. Schnipper departed Zimbabwe, and Neela and I return to St Albert’s. I spent most of my remaining time at St. Albert’s working with Dr. Neela and two staff members, Mrs. Itai Nyamuranga, PCN, Counsellor, and Mr. Joseph Makaza, Health Information Officer, to design our VIAC project’s community awareness initiative – a critical component of the cervical cancer prevention project – and develop its budget. We often worked into the evening. 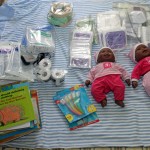 I met with Mr. Makaza on a redesign and update of the St. Albert’s Mission Hospital website. The new site will have updated information, photos, and donor and progress reports. It will be maintained largely by Mr. Makaza. More on the new St. Albert’s website soon.

Last, I delivered donated medical supplies, children’s books and two dolls to the hospital. Why the dolls? Well, toys are useful to aid physical therapy for children, especially when working to restore dexterity to burned hands. The dolls are a response by a donor after seeing the photos below taken during an earlier visit of children we met on the path to the hospital.

March 27, Neela and I return to Harare. I departed for home the next afternoon. I will write more about the cervical-cancer prevention project in coming posts. You can read the executive summary of our project online. 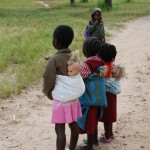 Two young girls at St. Albert's carrying dolls in the traditional way on their backs.

Young girl at St. Albert's carrying a doll on her back in the traditional way.