Your donations to BHA help St. Albert’s Mission Hospital to remain open and to provide medical care to the 120,000 people in its impoverished rural district and others who come from as far away as Harare and Mozambique. During 2017, we focused largely on maintaining the hospital’s cervical-cancer prevention program and improving water availability within the hospital. Please note that we need your help to continue our work in 2018. Please make a donation here.

The program began in August 2013 and has continued uninterrupted since then, thanks to grants administered by BHA and obtained by oncologist Dr. Lowell Schnipper, Theodore W. and Evelyn G. Berenson Distinguished Professor of Medicine in the Field of Oncology, Harvard Medical School, Clinical Director, Cancer Center and chief of Hematology/Oncology Division, emeritus at Beth Israel Deaconess Medical Center Cancer Center. As of March 31, 2017: St. Albert’s had screened a total of 7,305 women; identified 329 women with precancerous changes and more than 74 women with likely cervical cancer; conducted 16 awareness campaigns; eight screening outreaches screened 154 women at rural health centers who could not afford to travel to the hospital.

A grant awarded to Dr. Schnipper provides $20,000 per year for 2017-19. That amount primarily covers the wages for four nurses who conduct the clinic and outreach screenings and fuel for outreach screenings. Donations from you are needed for additional expenses, such as replacing a broken camera used to photograph the cervix to help with diagnosis and quality control.

A second and similar three-year grant obtained by Dr. Schnipper supports cervical-cancer screening at Karanda Mission Hospital over the same period. Our July trip to Zimbabwe (described below) included visiting Karanda to discuss the needs of their VIAC clinic with Dr. Paul Thistle, OB/GYN, and provide a cancer-education workshop to hospital staff. 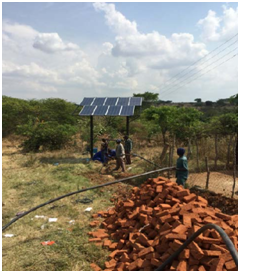 Dr. Julia Musariri, director of St. Albert’s, began dreaming of a solar-powered water pump in early 2017. It came when the hospital had no general electricity for 14 days and “water from boreholes became zero.” They used a tractor pulling a water tank to bring water to the kitchen, laundry and to some homes. “We had to discharge most of our patients except for those who were critical. It was difficult to manage the hospital with piles of [soiled] linen because [the laundry] could not cope by hand washing,” wrote hospital director Dr. Musariri. A solar-powered water pump would enable the hospital to continue operating even during prolonged power losses.

The pump was purchased with the help of a $2,000 donation to BHA raised by the St. Louis College of Pharmacy’s International Student Organization during their 2017 annual fundraiser in May. In the end, however, the cost of the pump was more than $9,400. Additional funds were provided by donations from Dr. Lowell and Hester Schnipper and by your donations to BHA.

On Nov. 20, I received an email from Dr. Musariri saying that the solar water pump was operational. “We have had power cuts since 16 Nov. 2017 to today. But the hospital has water. Accept our sincere gratitude.”

January: BHA was contacted by Botswanan journalist seeking information for an article about cervical cancer in Zimbabwe. She wrote it for Women and Girls Hub, an online news platform that focuses on issues affecting women and girls in the developing world. Read the article here

February: A long-awaited shipment of refurbished medical equipment arrived at St. Albert’s that was paid for by a grant obtained by Dr. Lowell Schnipper. The equipment was provided by the International Medical Equipment Collaborative (IMEC). It included a badly needed X-ray unit, a suite of rehabilitation equipment, a chemistry analyzer, GeneXpert, exhaust hood and other equipment for the hospital’s clinical laboratory, among other things. BHA helped coordinate the shipment and served as the shipper of record.  BHA also funded an expansion of St. Albert’s clinical laboratory that was necessary to accommodate the new fume hood and equipment.

May: BHA helped coordinate visits to St Albert’s by two pediatric fellows from Nationwide Children’s Hospital in Columbus, Ohio. One of the young doctors was trained in the fundamentals of neonatal resuscitation through a program called Helping Babies Breathe. She brought several mannequins with her to train midwives and other providers at St. Albert’s in the technique. She also carried a new battery for a MacBook Pro, used by one of the St. Albert’s doctors, and an HDMI cable to connect the laptop to the hospital’s projector, both purchased by BHA. A second fellow from Nationwide Children’s was already at St Albert’s. Five pediatric fellows from Nationwide Children’s have visited St Albert’s in the last three years, and BHA helped coordinate all of them.

Also in May: Dr. Anna Nyakabau, a radiation and medical oncologist from Zimbabwe, traveled to Boston for about 10 days to visit Dr. Schnipper and observe radiation and medical oncologists at Beth Israel Deaconess Medical Center. She then came to Columbus to observe the treatment of breast and other cancers at Ohio State University’s Comprehensive Cancer Center – James Cancer Hospital and Solove Research Institute. I then drove Dr. Nyakabau to Chicago where she attended the American Society for Clinical Oncology (ASCO) annual conference before returning to Zimbabwe.

Along with an interest in the treatment of breast, cervical and prostate cancer, and radiation technique called brachytherapy, Dr. Nyakabau works to improve cancer control activities in Zimbabwe. While at Ohio State, she recorded a video titled “Cancer Prevention in Zimbabwe and Other Under-Resourced Countries,” which is now part of the online course offered free by the Ohio State cancer program called Introduction to the Science of Cancer.

June: An editor at the Financial Gazette newspaper in Harare contacted BHA. The result was an article I wrote (consulting with physician friends in Zimbabwe.) about the importance of cancer education and cancer literacy for The Health Funder, a magazine published for the Association of Health Funders of Zimbabwe. You can see the article here and the issue here: The Health Funder magazine.

July: Dr. Lowell Schnipper and I met in Zimbabwe for a 10-day visit. We were joined by Ms. Megan Jukich, a laboratory manager at Ohio State’s James Cancer Hospital. In Harare, our activities included:

Here is a video that takes you on a walk from the hospital guest house to the hospital gate and includes an unplanned appearance by Dr Musariri: https://youtu.be/orKnuCG7-Fc

This short video shows the hospital’s reservoir on a quiet evening: https://youtu.be/5A8KfLGa02g

August: Dr. Schnipper helped doctors at Parirenyatwa Hospital obtain a donated subscription to UpToDate, an online source of medical information for all manner of medical and surgical problems. It is used widely by physicians at many U.S. teaching hospitals.

During much of 2017, Dr. Schnipper worked with Dr. Paul Thistle at Karanda, Dr. Megan Fitzpatrick at Stanford and others to organize a study to learn what subtypes of HPV were prevalent among women coming to Karanda for cervical screening. The study should begin soon and could produce data that will help estimate the effectiveness of current HPV vaccines in Zimbabwe.

Thanks to your donations, the hospital had water during critical times in spite of electrical outages. That is just one of the ways that you make a difference. Your support helps the doctors and staff at St. Albert’s continue their work. Please make a donation to BHA today. Thank you for your consideration and for your support!

Take care everyone and keep well…Darrell