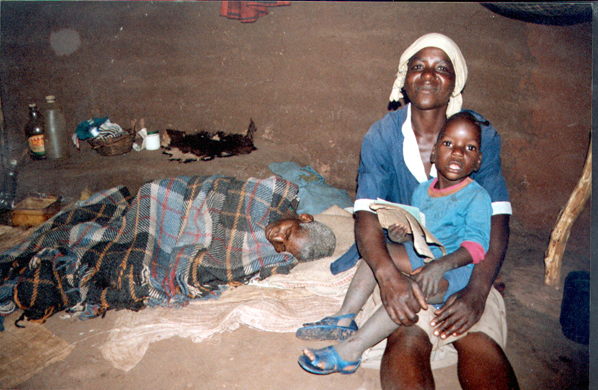 Elderly woman with cervical cancer and vaginal fistula. She was cared for by her daughter.

The 9 March 2011 post about cancer care in Zimbabwe has led to a series of interesting comments, many of them relate to cervical and breast cancer. The suffering caused by cervical cancer in Zimbabwe was etched into my mind in December 2000, during my second visit to St. Albert’s. I was with the hospital’s home-based care team as they did home visits. The eight or ten stops that day included the elderly woman in this photo who had cervical cancer. In her case, progression of the cancer had caused a vaginal fistula. The woman hardly stirred while we were there.   The woman’s husband had abandoned her in this hut on their homestead. She was destined to spend her last days lying on empty feed sacks on the hard floor. Fortunately, she was cared for by the daughter in the photo.

I thought about the work that caring for the elderly woman had to require. In the U.S., caring for an incontinent elderly adult is difficult even with washing machines, dryers, unlimited clean water, and stocks of sheets and clothing. The daughter had none of those conveniences…no appliances, no electricity, and she had to fetch water, perhaps from some distance away. The St. Albert’s team checked the elderly woman’s condition, answered the daughter’s questions and offered advice on how to keep the woman as comfortable as possible. The team provided paracetamol (a mild pain killer) and some pads, bandages and other supplies. Then we returned to our pick-up truck and left for the next stop. I took with me this woman’s image.

Since then, I have also met several women in Zimbabwe with breast cancer. All these women who were coping with cancer came to mind again when the topic of breast and cervical cancer came up on the BHA blog. According to the World Health Organization/Institut Català d’Oncologia (WHO/ICO),   cervical cancer is number one cancer among women in Zimbabwe, with an estimated 1,855 new cases annually and 1,286 deaths due to the disease. That year also saw 638 new cases of breast cancer and 359 deaths from that disease. The figures come from the International Agency for Research on Cancer (IARC) and their GLOBOCAN statistical report.  The pie charts below present the estimated number of cancer cases and cancer mortality in women of all ages in Zimbabwe for 2008. Cervical cancer accounted for more than a quarter of cancer cases that year, followed by Kaposi sarcoma and breast cancer.

This is particularly tragic because cervical cancer is highly preventable with proper screening and treatment of early disease, according to the Alliance for Cervical Cancer Prevention. I will write more about this next time. 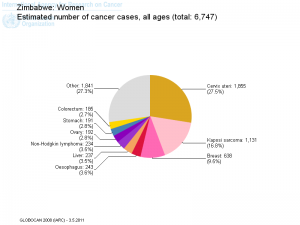 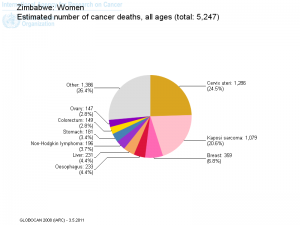 2 thoughts on “Cancer in Zimbabwe: Can we ease the suffering?”