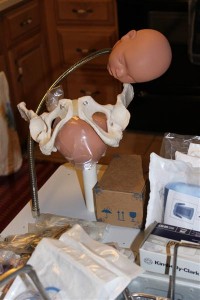 This model of a pelvis with fetal heads was one of two hand-carried to St Albert's in March.

The number of midwives in Zimbabwe’s public sector is down by 80 percent, making it difficult for pregnant woman to find skilled assistance for the delivery of their babies, according to a 12 May 2011 news story by IRIN, the United Nations humanitarian-news organization.

The article notes that midwives can avert 80-90 percent of maternal deaths and reduce the deaths of newborns from preventable complications.

This information comes from a recent report on Zimbabwe’s progress toward achieving the Millennium Development Goals, compiled by the UN Population Fund (UNFPA), the UN Children’s Fund (UNICEF) and the World Health Organization.  To help ease the shortage, St. Albert’s Mission Hospital will begin a midwife training program in September 2011. Better Healthcare for Africa (BHA) is supporting the St. Albert’s program by purchasing teaching models and other supplies that will help provide effective and realistic training for the midwifery students. Funds provided by BHA contributors made these purchases possible.

Two of the models were hand-carried to Zimbabwe in February during a visit to St. Albert’s (pelvic bone with fetal head, and a fetal skull); three others were sent to Hospital Sisters Mission Outreach in Springfield, IL, and were included in a container of supplies being shipped to St. Albert’s by Brother’s Brother Foundation (breast model, cervical dilatation/effacement simulators, and newborn brown baby boy and girl). The shipment of supplies and equipment will leave for Zimbabwe in late May or early June. BHA also contributed $5,700 toward the cost of shipping the container.