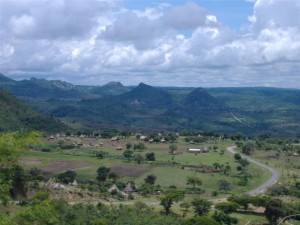 A village on the escarpment near St. Albert’s Mission Hospital

Abby Norris Turner, PhD, is a public health researcher in Ohio State University’s Department of Internal Medicine, Division of Infectious Diseases, who has conducted research in Zimbabwe since 1999. Her work focuses on women’s reproductive and sexual health. Her current project involves a counseling intervention related to practices that women undertake such as drying the vagina to increase male pleasure during intercourse. Such “dry sex” may increase the risk of acquisition of HIV as well as another reproductive tract infection called bacterial vaginosis.

Before Abby left for a trip to Zimbabwe in April, Better Healthcare for Africa helped her arrange a meeting in Harare with Dr. Elizabeth Tarira, director of St. Albert’s Mission Hospital, to explore the possibility of doing some work at St. Albert’s. Abby asked Elizabeth to name the most pressing public health problems in the area around St. Albert’s. Here are the leading problems Elizabeth noted:

The leading problem facing the community, Elizabeth said, is sexual violence against women and children. Factors contributing to this problem include

myths about HIV (for example, that having sex with a virgin or young child could cure HIV), polygamy, and widow inheritance. Elizabeth noted that there had been a considerable increase in the last few years in reports of sexual violence, including recently a five-year-old child who had a sexually transmitted infection. She knew of seven convictions of rapists in just the last two years, which was a big success given the difficulties in prosecuting these cases.

To learn how local myths are stalling the treatment of infants with HIV in Malawi, see this IRIN story.