In an earlier post, I described preparations for two “Understanding Cancer” workshops at St. Albert’s Mission Hospital in Zimbabwe Nov. 10 and 11. I worked with Dr. Julia Musariri, the director of St. Albert’s, and with Dr. Stanely Tapesana, one of the hospital’s doctors, to present the workshops to nurses, midwives and other hospital staff. Dr. Tapesana presented the first workshop on Tuesday, 10 Nov.; I presented the second on Wednesday 11 Nov. Both went well, and we learned much from the experience.

The “Understanding Cancer” workshops were based on Introduction to the Science of Cancer (ISOC), a free, noncredit, online course offered by the OSUCCC – James and Ohio State’s Office of Distance Education and eLearning. The online course includes more than 35 videos. Each video lecture explains a particular cancer-related topic.

The goal of the online course is to promote cancer prevention globally through education; the goal of the “Understanding Cancer” workshops is to provide cancer education to audiences that have limited Internet access using key ISOC videos. 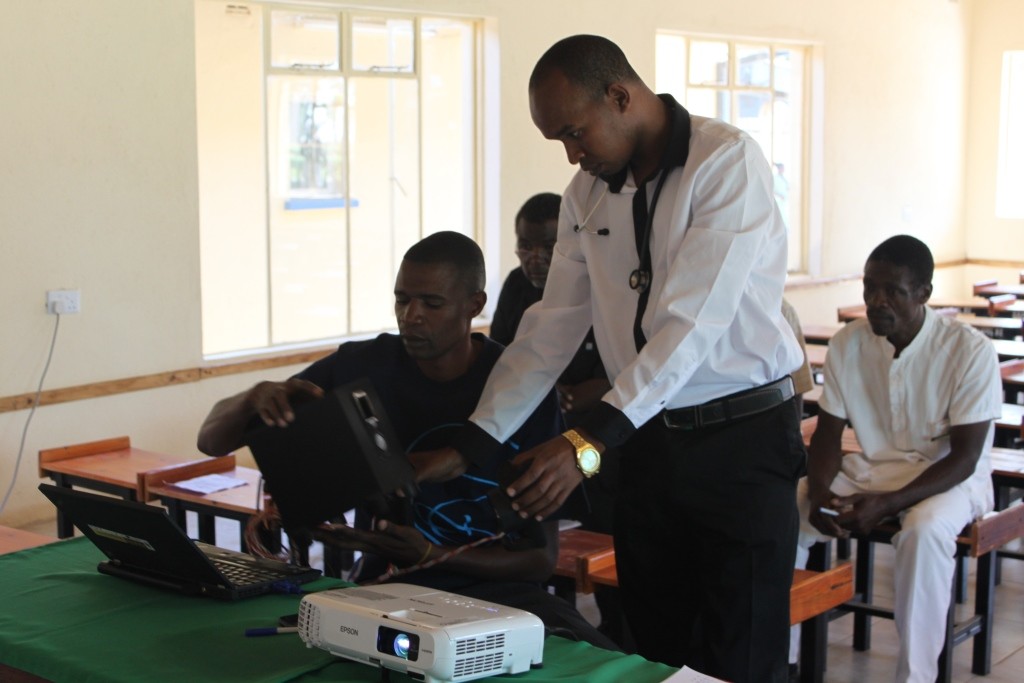 St. Albert’s is a 140-bed hospital located 120 miles north of the capital city Harare. It is an area of subsistence farmers. The hospital stands on the edge of the Zambezi escarpment, with the Zambezi Valley 4,900 feet below. On a clear day, one can see the Cahora Bassa reservoir on the horizon in the neighboring nation of Mozambique. People come to the hospital from surrounding villages on the escarpment, from the valley and from Mozambique and the city of Harare.

People living in the valley are poorer than those on the escarpment. Life there is more difficult. It is hotter, the soil is poorer and malaria is a greater problem. St. Albert’s oversees 11 “rural health centers,” small clinics run by nurses who dispense antiretroviral and certain other drugs and provide basic care. The most distant rural health center is more than 100 miles from St. Albert’s in the valley and only a few feet from the Mozambique border.

The workshops were held in the hospital’s new chapel. They began at 9 a.m. The first (Tuesday) workshop included 30 hospital staff and two teachers. We’d hoped for more teachers, but the school administration decided at the last minute that they could not afford to release the teachers for the workshops. The Wednesday session had 51 hospital staff, including a primary-care nurse from each of the hospital’s 11 rural health centers.

Mr. Joseph Makaza, the hospital’s information officer, set up the laptop and hospital projector, then hung a white cloth for a projection screen. Dr. Tapesana brought speakers from his home stereo, which provided better audio than the projector alone. 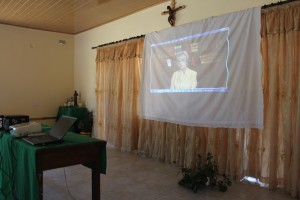 A table cloth served as a projection screen.

The hospital was without electricity both days, so the emergency backup generator was used to provide power for the workshop. (Electrical power was typically available from around 8:30 p.m. until 3:00-8:30 a.m. during my visit).

Dr. Tapesana was a masterly teacher. He related well to the audience, incorporated humor into the discussion and moved between English and Shona (the endemic language) as he expanded on the cancer topics. 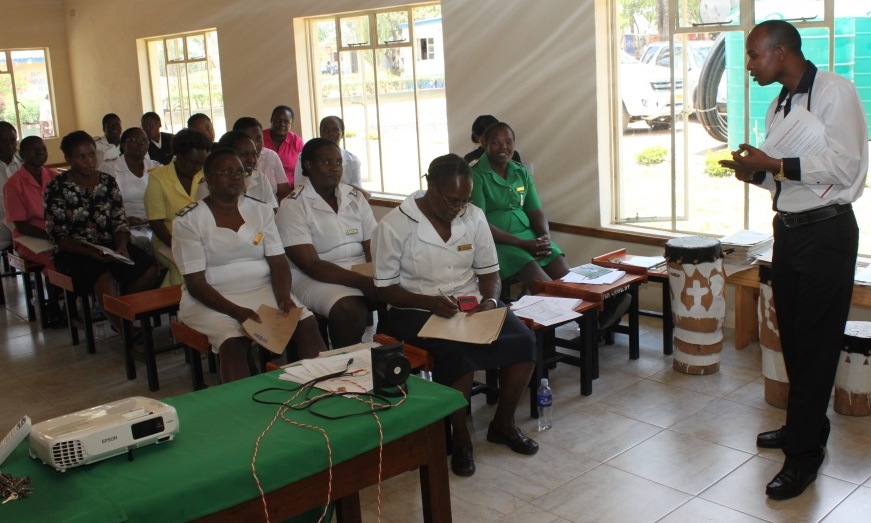 The second workshop on Wednesday was attended by 51 people, and it included a primary-care nurse from each remote rural health center. Dr. Tapesana was in surgery most of the day, so I filled in between videos. My approach was to discuss something mentioned in a video and expand on it. For example, the treatment video mentions standard therapy, which was a chance to address clinical trials. They were not familiar with clinical trials. When I talked about hereditary cancer after the prevention video, I learned that they did not know about BRCA1 and BRCA2 gene mutations.

The workshops ended at 4 p.m.

Uses of the booklet

The booklet enabled Dr. Tapesana to review the content and technical level of the videos before the workshop. We also used the booklet to write the pretest. We ended up with 62 true/false questions that focused on the most important points for nurses, midwives and nurse-aids in the St. Albert’s setting. Two example questions:

The following are cancers

The following are screening procedures for cancer

Dr. Tapesana used the pretest as a teaching tool. During the discussion sessions, he read the appropriate questions out loud, e.g., “The following are cancers: carcinomas, true or false.” The audience answered in chorus, helping them learn the material.

Many attendees kept the booklet open in front of them and followed the information as it was presented during a video, then took the booklets with them for later review.

Last, if electricity had been unavailable or the projector broke down, the booklet would have allowed cancer education to continue by lecturing from the booklet.

The pretest and post-tests and an evaluation form for the second workshop will be analyzed in coming weeks. Based on comments heard after the two workshops, those who attended believed they knew much more about cancer than they did before the workshop. As one nurse mentioned to hospital director Dr. Julia Musariri, “I know better how to talk to patients about cancer.”

The hospital used its emergency generator to power the workshops. Normally, the hospital reserves the generator for surgeries – cesarean sections, mainly – and runs it for 2-3 hours midday for X-rays, lab tests, to run the autoclave and to power the kitchen and laundry. (Parts of the hospital are solar powered, and solar power is gradually being installed in other areas.)

Although they needed to use the emergency generator, Dr. Musariri said, “We thought the workshops were a priority for our nurses and staff because they would share what they learned with patients in our hospital and also at home and in the villages. It will improve the quality of life for people, and that is why we are here.”

After the second workshop, the hospital staff expressed their thanks for the workshops by giving me two beautiful African shirts. 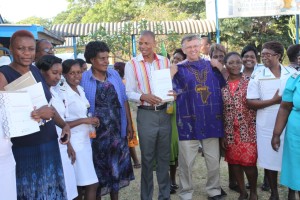 Hospital staff showed their appreciation for the cancer-education workshops.